To say that fishing was outstanding during the inaugural Casa de Campo International Blue Marlin Classic would be an understatement, unparalleled would indeed be a more accurate description!

At the end of day one the fleet of 16 tournament boats had already released a whopping 39 blue marlin and at lines out on day two, the total had risen to 73 blues.  Number such as these represent an incredible average of 4.56 blues per boat in this two day event.

It was Floridian Frank Rodriguez’s 70’ Viking Fa La Me with Captain Rob Moore that ran away from the rest of the fleet from the get go by releasing six blues on day one and repeating with another six on day two to complete an even dozen in just two days.  “We were very fortunate that we were able to capitalize on most of our bites” said a smiling Captain Moore.  Why shouldn’t he smile, they took home the two dailies, first place in both pots, the last day Shootout plus an impressive array of luxury items in prizes with a very impressive 4,920 point total.

Not to be outdone, Bill Ingram’s Reel Passion from North Carolina kept pace with six blue marlin of their own on day one, but the same luck did not continue for them on day two thus finishing the tournament in second place with a total of 3,280 points.  Meanwhile a battle for third place ensued in the afternoon hours of day two between Click Through, Bandolera, Ambush, Shoe and Jaruco with Florida Panhandle’s Click Through pulling ahead by releasing their seventh blue marlin of the tournament in the final minutes and taking third place team honors as a result.

In the individual angler standings it was Bill Ingram aboard Reel Passion who shined by releasing six out the eight blues registered by his team and earning him the Mustad Silver Hook Top Angler Trophy.  He was followed by Coral Gables, Florida angler Stephanie Choate aboard Ambush who outshined her dad, the well known Tim Choate, by releasing six blues.  Stephanie not only took Second Place overall angler but was also recognized as the tournament’s Top Lady Angler, while Third Place High Point Angler belonged to Taylor Beckford fishing aboard Fa La Me with a total of four blues.

Dates are set for 2015 when the Casa de Campo International Blue Marlin Classic will move to a three fishing days format with a lay day.  The event will be held March 17th thru the 22nd with excellent activities already in the works including a skeet shoot competition and a golf scramble on the lay day.  Mark your calendars and please join us.

Part of the proceeds from this event will be donated to Hogar del Niño for tax deductable donations and information visit www.hogardelnino.com. 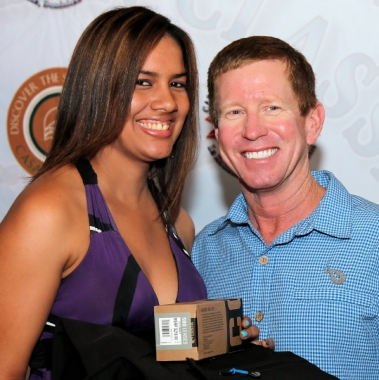