Marina CASA DE CAMPO receives Alvaro de Marichalar in his journey around the world on a Jet Ski.

Casa de Campo, La Romana.-As a part of his journey around the world, looking to cross it on a “Jet Ski”, The Spanish adventurer Alvaro de Marichalar visited the Dominican Republic, where he discussed the details of his journey and its importance for international nautical tourism.

The explorer arrived at the CASA DE CAMPO Marina as one of his stops in his trip around the world that commemorates the V Centenary of the first Circumnavigation of the planet, expedition sponsored by Charles I of Spain, which departed from Seville under command of the Portuguese navigator Fernando de Magallanes and was completed by Juan Sebastian Elcano in 1522.

During his stay in La Romana, in the east region of the country, Marichalar carried out various activities among which were the press release, the Social Cocktail in the Marina CASA DE CAMPO Yacht Club in his honor and a conference in the “Hogar del Niño” of La Romana before setting off in his journey next Wednesday on his way to Cuba.

Marichalar set off from Seville, Spain, on August 10th 2019, and in the first stages went around all of the Iberian Peninsula. On December 10th he started his journey across the Atlantic Ocean, setting off from Gibraltar, in the only part of his journey in which he has counted with a support vessel, arriving on December 25 that Guadalupe, in the French Antilles.

In the next stage of his trip, Marichalar will once again set off on Wednesday setting his course towards Cuba before heading to the United States and Central America. He will then cross the Panama Canal and travel to Alaska, later he will border Asia and return to Spain through the Mediterranean. 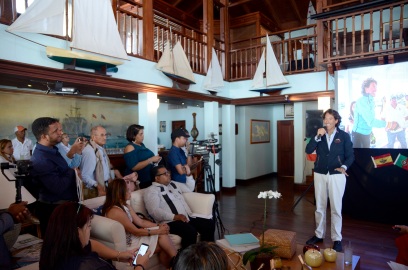